Those of you who follow my Facebook fan page are well acquainted with my 2016 stitchy project, Lady of the Flag. I entered it in the State Fair of Texas Creative Arts competition and received second place, which was a HUGE compliment. It’s the highest award I’ve ever won at the State Fair and I was unbearably dorky when I got the great news.

Some of you are also aware that I am a proud member of the Daughters of the American Revolution, having joined as a tribute to my late father. He was a decorated World War II vet who never lived to see the memorial built in tribute to him and the amazing men and women like him. While my sass and humor came from my mother’s side of the family (they’re all bloody crazy), my father raised me with a solid love for my country and a sense of patriotism that feels rare today.

A friend, and fellow Daughter, asked me to submit Lady of the Flag in the Daughters of the American Revolution American Heritage contest. It’s an annual contest showcasing the talent of all the amazing ladies in this organization, encompassing a wide variety of arts like writing, sculpting, quilting, needlepoint, and my favorite…cross stitch. Of course, I said yes.

I’ve shared some of the steps I’ve had to take on Facebook, including the fact that I had to write a page explaining why I stitched her…and who I stitched her for. One of y’all asked me to share it, but I can’t remember who. I’ve slept since then. 🙂 For what it’s worth, though, here I am to share what I wrote to accompany the high resolution photographs of Lady of the Flag.

Like many young men of the Greatest Generation, my father went to war to defend our country during World War II. He was just 18 years old when he entered the US Army, emerging several years later with a Purple Heart and several other medals, including the Bronze Star.

He lived his entire life never speaking of the war, even to my mother. I remember playing beside his chair and asking him about the angry scars that ran up his legs. He would always reply “That’s something that Daddies don’t talk to their little girls about, sweetheart.”

As it was for so many of our brave soldiers, and still is today, the war didn’t just leave scars on his legs. He came home a broken and battered old man in a young man’s body, unsure of how to handle the grief and terror of the battles he fought. He pushed on, though, as so many did in those days.

He and my mother raised six children, never letting us take for granted the wonderful freedoms we enjoy as Americans. My father showed us that our country’s history and heritage were to be honored and protected. While the battles raged on inside his head, his patriotism and his sense of duty to his country never wavered. Although I always longed to be closer with my Dad, I will never forget the lessons he taught me about patriotism, love for our country, and how very deserving our veterans and active military are of honor and respect.

His mother was a needleworker. Although I didn’t know her, I always felt a kinship with her because of that. Even as a child, I was drawn to needlework. My own mother loved to sew as well. During the most trying times of my life, it’s been needlework that has calmed my mind and given me focus. I wish my dad had found a craft that did the same for him. I know it would make him smile to see that I’ve carried on his mother’s tradition, and her mother’s as well, of keeping needle arts in the family.

Dad would have been incredibly proud to learn that he was a direct descendant of a Revolutionary War patriot. My membership in the Daughters of the American Revolution was the beginning of my lifelong tribute to my father’s memory. Stitching this beautiful piece is also part of that tribute.

My father taught me to respect and cherish our flag, so naturally this piece was something that called to me. I chose the hand-dyed, stormy gray linen as a foundation for the beautiful lady in the gilded dress, holding our flag in her arms. To me, it parallels the stormy turmoil of war that my father braved in order to help secure a beautiful future for our country.

To me, the 2016-17 theme of “Moving Family Traditions Forward with the Arts”, is represented on many levels in Lady of the Flag. As many of the Elwood women who came before me, I’ve used a needle and thread to create a one-of-a-kind heirloom for my family. She hangs proudly in our home, and every time I look at the rich colors of the flag and the beaded finery of her dress, I imagine what Dad would say if he could see her. I know he would be touched and incredibly proud, and I dare say that my grandmother would even be impressed at the work I’ve done…which will be around long after I’m gone. A loving, beautiful tribute to my father and all the heroes in our ancestry who came before him.

I mail the entry packet off to the State Chair this evening. 🙂

Lady of the Flag faced some very stiff competition at the 2016 State Fair of Texas and she won a very deserving 2nd place ribbon. Taking that into account, I highly doubt that she’ll make it into the national finals. For me, it’s not about winning…it’s about the stitching. It’s about what stitching does for me, what it means to me to be able to do it, and the beautiful things I’m able to have (or give away as gifts) when I’m done. And, as always, I feel Dad smiling down at me from Heaven…with tears in his eyes. Proud.

Thank you all for being such great fans, and for always supporting me by listening to my crazy rants, my nutty ideas, and my obsessing over details. ♥ 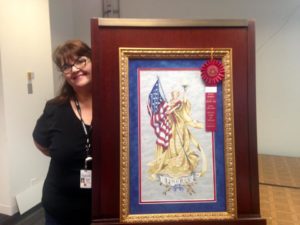