I just had the most amazing ten minutes of my life…and no, I’m not talking about the time I lost my virginity to a total turd who didn’t deserve me. (I’ll bet I can get an AMEN! from a few of you on that one, right?) But that was more like five minutes, not ten.

Actually, perhaps I should say that I just had the most amazing ten minutes of 2014. Because, really, if HMH reads this he might wonder why our wedding day didn’t make my most amazing list. Oops.

Back to my amazing ten minutes – which actually, now that I think about it, included quite a bit of discomfort in the hoo-hah area…not unlike the aforementioned first time. Okay, I’m off track again.

I just rode a bike for the first time in…five years? I think that’s about right. And even that time lasted exactly 15 minutes and never happened again. At that time in my life I still ate tons of processed “diet” foods and gallons of diet soda and it was much harder to push my much heavier body down the road, that’s for sure.

HMH has a passion for trail bike riding, so we have two bikes already – and many more to follow, I’m sure. Even better, he actually understands the ergonomics of bike riding…so when I got on the bike the first time, he could see clearly that the seat needed to be raised in order for me to pedal. I thought he was insane. I actually argued with him. Then I was afraid to push off and go because I thought I would fall. Seriously, when I put my full weight on the bike it felt like the seat was in my throat. 304 pounds is a lot to ride on a bike seat.

After a few minutes of whining, I pushed off…and my amazing ten minutes began. OMG! I was riding a bike.

Riding a bike. Me. 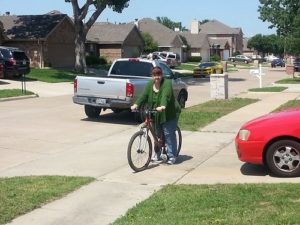 I rode just around the corner and turned around and came back. It was effing awesome. I stopped in front of the house for a minute and then I took off again. HMH was urging me to try going around the block, so I went for it. Then he jumped on his bike and came after me.

We rode around our block together. At the end of the block, my legs started to fight back. I’m sure if they could speak, I would have heard something like “What the hell is this exercise shit? You never make us do this!” But I didn’t care. I couldn’t get the stupid smile off my face. I was having fun.

I really had to work to get myself the rest of the way home. My legs were like jello and my lady cave was seriously pissed. I will admit, though, that the bike seat wasn’t as painful as I expected.

I had fun today. I didn’t expect it. I really thought it was too soon to ride a bike, so when I took off and was actually doing it…I was elated. Overjoyed! Feeling the breeze in my hair and propelling myself through the neighborhood was absolutely fantastic. Riding a bike is a totally unremarkable, every day thing that millions of people do every day – but for this fat girl it was an unexpected victory.

I’m so happy that I had the courage to try this today. I was certain I would fail. Certain it would be too much too soon. I’m so happy to prove myself wrong. In fact, now that I’m done writing this blog post…I think I’ll go again.

Once more around the block, peeps!!!

3 thoughts on “Once around the block”