Not gonna lie, peeps. It’s pretty damn thrilling to be sitting here with a total weight loss of 79 pounds.

I have a bit of a deja vu feeling about some of this, however. Back in the early 90’s my quack of a doctor misdiagnosed me with Polycystic Ovarian Syndrome (PCOS) and told me that I would never be able to lose weight at a normal rate. She put me on a 750 calorie a day diet and told me to work out at least an hour a day…and I did. I lost 75 pounds in 4 months.

I weighed 295 pounds when I started that diet and I was 220 pounds when I hit the plateau that ended it all. No, it was more like a brick wall. I couldn’t have lost anymore weight if I’d stopped eating all together. My metabolism had had enough. I hit the wall and then, to make myself feel better, I started dating again. Big mistake since I apparently had a sign on my back that said “Assholes, please hit on me.”

On the bright side, I was having a great time shopping for clothes. Somewhere around 230 pounds my legs started looking like legs again and less like tree stumps. I wore dresses to work and even got girly and matched my jewelry and shit. Before I lost that weight I would just slap on whatever tunic covered my front butt well enough.

Never heard of front butt? It’s that horrible chunk of fat hanging off the front of my hips that’s definitely not supposed to be there. Blah!

It was really fun shopping for clothes when I was a size 18. Stores actually had cute things in my size and they didn’t look too shabby on me. Losing 75 pounds was fun, even though I was starving myself on the advice of a doctor who had no effing idea what she was talking about. (Incidentally, her diagnosis of PCOS was later disproved by my next doctor…who explained that actual tests are required in order to arrive at that diagnosis. The new doctor ran the appropriate tests, including a pelvic ultrasound and blood work, which proved I didn’t have PCOS at all.)

Anyway, here I am again. I’ve lost 75 pounds plus 4 more…and it’s not as much fun as it was the last time. Mostly because I’m still quite a huge girl despite having lost a shitload of weight…and clothes that look cute on the hanger just don’t look cute on me.

Just a week or so ago I dropped my third size. I was so excited about it that hustled my booty over to the mall on payday to grab a few things. I’m in particular need of clothes for work – especially since I’ve just been promoted and I have to look professional all the time. But I also wanted to pick up a light jacket in case HMH wanted to take me out some lovely spring evening. My current jacket is more of a wrap coat at this point. The day I had my surgery, there was about 5 inches too much of me to button this coat. Now look at it: 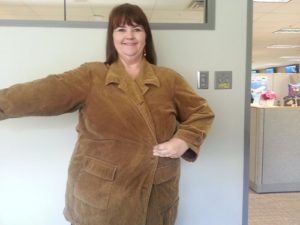 I grabbed quite a few cute things and bounced off to the dressing room. I found a couple suit jackets for work as well that would look cute. I thought. How exciting! Girly tops. Suit jackets. Even a light jacket for the occasional spring rain storm. Perfect!

Tried on the tops. Jabba the Hutt covered in ruffles. Tried on the suit jackets. New fashion length does nothing for me. I need another yard of fabric to cover my ass. Tried on the coat/jacket. Fatty at a pocket convention. Seriously, where the hell did all the pockets come from? It was way cuter on the hanger.

Seriously, though, I’m really grateful for the success I’ve had so far. I just wish shopping was a little more fun. It’s just not. I’m not there yet. And I have to just give myself permission to be disappointed that shopping is still a chore and move on. The most important thing is that I’m not a disappointment. I’m proud of myself.

For now, I’ll focus on getting my happy vibes from other kinds of shopping. Mainly from shopping at Pandora for charms to add to my weight loss milestones bracelet…and the Dooney & Bourke store for my reward when I hit the 200’s (or Twoderville). Twoderville sounds like an awesome place to party, doesn’t it?

I have five more pounds to lose before I’m in Twoderville, though, so I’m going to close out this post and go get my ass on the elliptical trainer. I can’t wait to get on the scale and see 299 blinking back at me instead of 300 and something.

What’s the next goal you’re excited about hitting for yourself?

4 thoughts on “The most fun I’ve sort of had”