So do you remember the episode of Friends when Rachel FINALLY realized Ross had feelings for her? They’d known each other since high school and he’d had a crush on her forever, but he could never get her attention. Yeah, I just had a moment like that…but not with Ross Geller.

The past several weeks have been a struggle for me. Things are crazy stupid busy at work right now, and not likely to lighten up until the holidays. My 12 year old craptastic Hyundai has been breaking down, viciously dipping into my handbag fund and putting household repair projects on the back burner. We’re in a bit of a financial bind at the moment.

On the happy side of things (I think) I’ve landed an opportunity to do some ghost writing for a decent sum…but where do I find the time for that? It’s rare that I can find time to write a blog post of my own. Am I to work a full day and then come home and work several hours more, then struggle to relax enough to get a few hours of sleep? For a Hot Mess like me, that’s not much quality of life…and honestly, one of the main things that keeps the food demons in check is me maintaining my quality of life.

To top it off, HMH has changed his work schedule and we’re all in the middle of adjusting to a new way of life because of it. So I’ve got a mountain of things to get through and the new schedule is jacking me up…and I’m constantly running around to compensate for it. Honestly…I’m quite stressed out. Things are a mess. 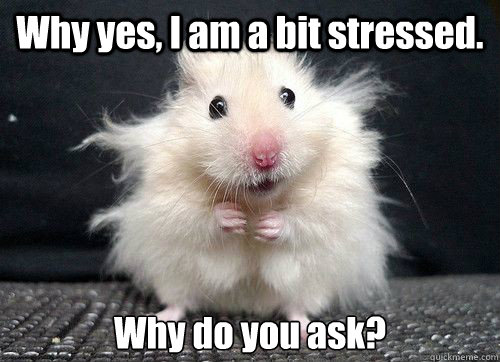 As y’all know, I’ve been trying to make exercise a real habit – and for a few weeks there, I was actually doing it. My alarm goes off at 4 am so that I can get up in time to get on the elliptical trainer and get on with my day. I was really kicking ass at getting it done every morning. And you know what? It felt great! I loved getting to work in the morning feeling wide awake and ready to go, even though I’d gotten up at an ungodly hour. I loved the energy I had and the powerful feeling in my legs and the downright badass feeling I had because I was actually effing DOING IT!!!

And then things got busy. Then they got crazy. The ghost writing job came…and the car problems…and the family members visiting and all the little busy work in between. And what did I do? What I always do: I started shutting down and eliminating things that I deemed an inconvenience. So…what have I always looked at as an inconvenience?

Yesterday, I was sharing all this with a friend while lamenting my own stubbornness and inability to juggle all this crap that’s going on…and BAM! It hit me like a truck load of Little Debbies: as things have gotten crazier, I’ve not had time for exercise and the stress is piling up.

Not exercising…and stress is getting worse…

Wait a minute…I may have something here…

I know, I know, I know…most of you are reading this and thinking “HMP, you’re a dipshit!” The older I get, the more I realize it takes me five times longer than the average person to really learn the big lessons in life.

I can’t tell you how many times I’ve read articles and books on exercise and have been told that it’s a great stress reliever…and every time I’ve read it, I’ve said “yeah, yeah, yeah…blah, blah, blah” in response. For me, I’ve always thought it meant exercise that people find enjoyable…and I can’t honestly say that about any cardio.

Sorry, fitness freaks of the world…it’s not fucking enjoyable to me. So I wrote it off as fitness guru rhetoric. It never occurred to me that ANY exercise, when done regularly, relieves stress. Even if you don’t like doing it.

Suddenly I was Rachel Green realizing she had feelings for Ross. But I’m not Rachel, I’m me. And I don’t have feelings for a lovable paleontologist…I have feelings for my elliptical trainer. Feelings that, for once, don’t involve anger and revulsion. Holy shitballs, Batman!

Actually, this has happened to me before. In 1986. Yep. I had just broken up with my first love and I was absolutely a mess. Even though I’d graduated high school four years earlier, I was flipping through my high school yearbook one day for some reason and saw something I hadn’t seen before. My sweet, lovable pal Dougie had written this in my yearbook:

“I never had the guts to tell you, but I think you’re the most beautiful girl in the whole world.”

I didn’t see it for four years because I never read it till then. What a superficial bitch, right? LOL. Poor Doug was probably waiting by the phone for a few days, wondering if I’d call and say I felt the same way. But no…I was too busy being happy that I was finally out of high school. I never knew he had feelings for me until it was too late. He probably led a horrible life after he realized he couldn’t have me. Poor Doug.

Actually, I’m still a little embarrassed that I never read what he wrote in my yearbook. He was the sweetest guy. How rude of me not to read it until it was too late. And then when I read it, I cried like crazy because I was all “OMG, the love of my life doesn’t want me…and poor Dougie might have really been the one but I was too blind to see it!” 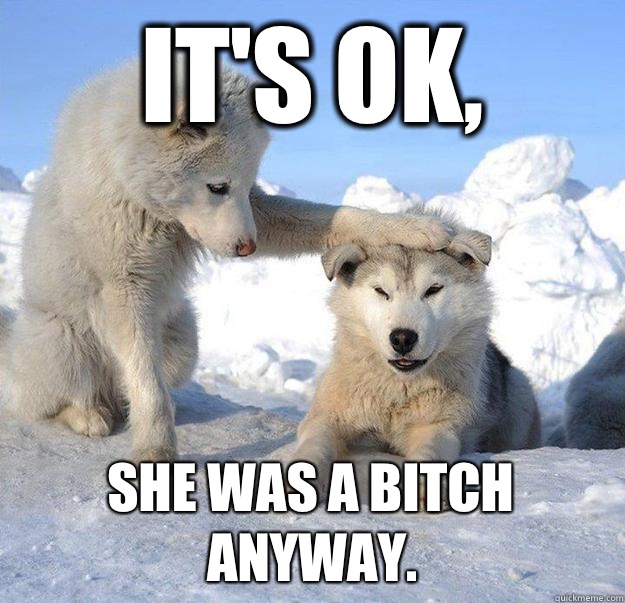 We were just two ships that passed in the night. Actually no. He was like a really sweet ship that probably would have been really nice to me. He would’ve treated me with respect and wouldn’t have tried to show me his anchor till I was ready. But I was a total bitch ship. Like a big shiny cruise ship with too much shit on her deck who thought she was all Royal Caribbean when he was just some local tour boat. Oh, for fuck’s sake, I don’t really know where I’m going with this. Let’s get back to my point…if I can find it.

All this time I’ve been angry and pissy about exercise, never realizing what it was doing for me. Thank God I had the fortitude to stick with it for a few weeks. I wouldn’t have noticed the difference otherwise. I stuck with it long enough to miss the benefits when they were gone.

Anthony and Cleopatra. Peanut butter and jelly. Ross and Rachel. HMP and exercise. Matches made in heaven, peeps.

(By the way, I reconnected with Dougie a few years ago. It turns out that not being able to date me didn’t ruin his life after all! He’s happily married with children and everything. I’m so glad he was able to rebuild his shattered life after losing out on a hot mess. *smirk*)

I haven’t exercised in a few weeks. I’ve been letting the stress monster get to me. My elliptical trainer is dusty and sad looking. It fills me with guilt every morning when I grumble and stagger past it on my way to the bathroom. So today, while I was housecleaning, I went into the bedroom and gave it a good cleaning. I wanted to talk to it, but I wasn’t sure what to say.

I can’t believe I never realized what you do for me?

No. I just sprayed cleaner and wiped it down with paper towels. I think it realized that I’d had this epiphany, though. I pushed one of the giant pedals too hard as I was cleaning and got a pretty good gut punch when it came swinging back at me. Probably my elliptical’s way of telling me never to ignore it again. We hugged it out, though. We’re good. Now it’s sparkly clean and waiting for me.

Another crazy work week is ahead of me…and I’m slightly more okay with it than I was last week. Because I know, even if I’m sleepy and grumbly at 4 am, I’m going to get up and get on my elliptical trainer. Because even though I might not like pumping away like a sweaty monkey at zero-dark-thirty, I love what it does for me. And that’s enough.

It took me a while, but I think I finally got the point. Elliptical trainer, you’re my lobster.

Do you have a dusty unloved friend sitting in your house right now? Maybe it’s time to pull the laundry off of it and put it back into use. What do you say?