Yesterday was a tough day, so naturally I was grateful when I put my key in the door and my feet hit the entryway. Home Sweet Home! As usual, my two gigantic dog-children, Kirby and Dyson, were the first to greet me. Dyson is still a puppy – sort of.  At six months, he’s already 70 pounds and his feet are the size of frying pans. He’s extremely rambunctious – especially when I come home – and he nips and bites when he’s excited.

Our dogs have procedures that must be followed by the humans. Whenever I’m gone for more than an hour, doggy hugs and belly rubs must be administered immediately upon my return. Kirby is extremely smart and has determined that there’s some kind of ergonomic advantage for me if she braces herself on the ottoman and stands up for me. Dyson just dances around on his giant frying pan feet, wiggling his huge booty until I get a hold of him.

I hugged Kirby as usual and felt her large head hit my shoulder. (There’s nothing like a hug from a giant dog, by the way. Nothing.) I went to hug the wiggly, wobbly Dyson and….CHOMP!

My sweet, darling, mop headed 70 pound puppy mistook my right breast for a squeak toy. Sweet jump’in Jesus, did that hurt. I admit it, there were tears. I clutched a hand to my wounded boobage,  opened the back door and let the dogs outside…then I leaned against the counter and wailed my ass off. Yowch.

As I stood there checking the inside of my bra for blood stains and dog drool, I realized that my right boob has lived a miserable existence. Honestly, when I’m 90 years old it’s going to be dragging on the floor while the left one comfortably slaps against my hip. I’m going to be one weirdly unbalanced senior citizen.

Of course, my right boob did have a somewhat glorious beginning. When I was a teenager, my dance studio was chosen to compete in quite the hoity toity national competition…in Las Vegas, of all places. Five seconds before our big finish, my right boob pops out of my costume to sing “HELLO!!!!” to the crowd.

I was sooo embarrassed. In retrospect, there really was no need – we were, after all, in Las Vegas…home of the dancing tits!

My right boob spent the next several years in relative tranquility. When I was 16, it was my left boob that got all the glory when Jim Sullivan tried to sneak his way to second base on our church camp hayride later that year. Much later, I married the hubby hubs. Hubby’s not a tranquil sleeper.  It’s like he’s a prize fighter…or a ninja. Many a night, my right boob has been a victim of what I call his “double flying elbows”.

Even so…no dance competition, no humiliation, and no flying elbows can hold a candle to what I am about to share with you. Surely, this last event will be forever known in the Hot Mess household as…The Great Boob Incident of 2007. Let me begin… 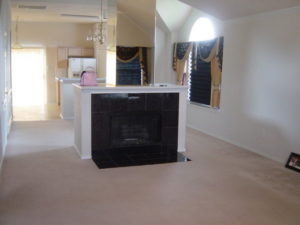 As you can imagine, a 17 foot long mirrored panel is a heavy thing. Hubby had managed to pry it loose in one long piece and it was swaying dangerously out of reach as he flailed around and tried to keep his balance. I ran to his aid, shoving myself up against the fireplace as hard as I could so that I could push the panel back towards him. Little did I know, but my right boob was shoved between the sheet of plywood and the top of the fireplace – and when hubby caught his balance and stepped back onto the plywood….SQUASH!!!

I screamed bloody murder as I got what can only be described as a Home Depot mammogram.

I screamed until no sound came out, I swear. Hubs was extremely concerned, of course, so he stepped closer to see what was wrong…further smooshing my right boob into oblivion.

“You’re standing on my boob!” I screamed.

Realizing for the first time that he was crushing one of his favorite things in the whole world, hubby yelled “Jesus!” and flew backwards…falling off the fireplace. I can’t tell you where he hit the ground or what position he landed in. As soon as I could free myself, I ran to the couch and fell over crying, clutching my injured boob, and screaming more obscenities.

If there’s one thing the hubs can’t stand it’s seeing me cry. He can’t take it. So he sits down next to me, trying to be soothing, talking to me in a sweet voice and saying “Baby…baby…”

He extends a hand and says “Honey, let me see it…” and I screamed back “You’ll never see it again, you bastard!!!!!”

Perhaps someday my right boob will live a life of peace and happiness…in a magical land free of synthetic fabric and underwire.  Maybe that’s too much to hope for.  My dream of boob world peace seems unattainable between the puppy and the hubby.  It’s almost bed time for me…and I see double flying elbows in my future.

I wonder if Victoria’s Secret sells plus sized steel breastplates?

14 thoughts on “Ode to My Right Boob”